While by no means all the stats you can find to compare the matchups in Week 5 of the NFL, we’ve taken the liberty to compare each team in a number of statistical categories for the upcoming week. We’ve also highlighted any area where there may be a matchup advantage/disadvantage in a game. It was decided to point out some of the more glaring differences and as such any stat that had a greater than 10 place ranking between the teams was highlighted. For instance on the Thursday night game Arizona’s 15th ranked Rushing Offense will go up against San Fran’s 32nd ranked Rushing Defense. Arizona is also ranked 14th in time of possession, compared to San Fran’s 31st ranking in that category. The chart will also note if a team has had a longer week to prepare having played last Thursday or if they had a bye the previous week, or a shorter week if they played on Monday, or in the Colts’ case are making an extra long travel coming from London. The game lines are that of the time of posting. 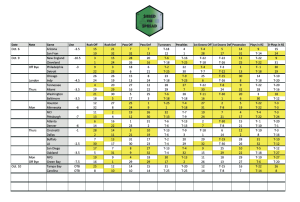