Tough to get too excited about either of these teams, what with the Esks riding a five-game losing streak and bringing a 1-5 record on the road with them into Commonwealth Stadium. Each team sits at 5-8 and in dire need of a win to stay in playoff contention. 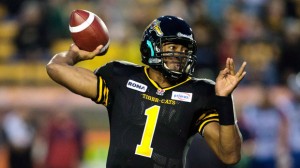 The Ti-Cats dismantled this Eskimo team only three weeks ago to the tune of 51-8 at Ivor Wynne Stadium, but then followed that up with a clunker to the league’s cellar dwelling Winnipeg Bluebombers. They then put forth an impressive effort last week to knock off the east leading Alouettes.

Edmonton hasn’t won a game since August 27, a 26-17 road win in Toronto. Though they’ve struggled to put up points all year, Hamilton could be the team to get against, as they’ve allowed the most points in the CFL this season. On the flip side, the Tabbies have scored the most as well, which could be trouble to match for an Eskimo team devoid of scoring.

In an effort to spark the offence, head coach Kavis Reed took over the offensive coordinator duties, leaving him in charge of all three phases of the team now (offence, defence, and special teams).

While this could be seen as a positive, he’s openly admitted he’s not well versed on the offensive side of things, and will still be leaning on ex-offensive coordinator and now quarterbacks coach Marcus Crandell, and David Kelly, the team’s offensive adviser (whatever that is). On top of that, while Kerry Joseph returns behind centre, it will be the third QB this team has started in the same number of weeks (Matt Nichols last week and Steven Jyles the week prior). And, add to that, CFL tackles leader J.C. Sherritt will be out for Edmonton leaving a rookie starting in his place.

Like I said to start this off, hard to make a strong case for either club, but I’m siding with the argument that there is just too much uncertainty in Edmonton right now. Hamilton has struggled, but maybe more-so underachieved, and with a win over Montreal last week and a 51-8 win over Edmonton already in their pocket, the score will most likely be much closer this time, but we’ll take the points with Hamilton.