Hedging your way to a profit

The View From the Couch: NFL Week 1

The Week 1 games are almost in the books, with only two more to me be played tonight on MNF, and there’s already lots to talk about with some impressive season openers, upsets and big letdowns from Week 1 so far.

Here’s a little recap of what I observed this weekend while trying to watch as many games as possible and get down as much action as I could.

Sometimes it’s good to be ugly

Every year there are teams that have a certain stench to them. You know the ones. The perennial bottom feeders, the ones who lack star player names, the ones who lost you countless tickets the season before.

Well 2012 is a new year, and while all these teams aren’t suddenly Super Bowl contenders, they aren’t necessarily as bad as they were a year ago, and thus quite often provide great opportunities when wagering.

In Week 1, Cleveland, Washington, Jacksonville, St. Louis, Tampa Bay, and to a lesser extent Arizona, could all fall into this category. These teams were all underdogs, yet pulled off not only ATS covers, but several SU wins. The most surprising being the Redskins, who absolutely dominated the Saints in the Superdome in RG3’s debut. I already thought the Saints would be hard pressed to match last season’s 13-3 record, especially with half the coaching staff suspended, but after the performance they brought against the Skins, I’m more convinced than ever that New Orleans will offer some solid opportunities to bet against them this season. That being said, we along with probably 95% of bettors out there, went down in flames with our money on Brees and the Saints on Sunday. 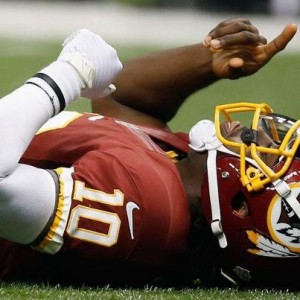 The Panthers have been a sexy choice to do well this year after Cam Newton’s outstanding rookie year, but while the Bucs did everything they could in Week 1 to impress and start fresh from a 4-12 2011, the Panthers did their best to dispel any notions of them being a Super Bowl contender, as C Ryan Kalil has predicted. Correction Super Bowl winner. While it’s far too soon to cast the Panthers aside, they will need to produce more than the embarrassing 10 yards rushing that they managed vs. the Bucs.

A rookie is still a rookie

Even though rookie signal callers are being thrown to the wolves earlier and earlier these days, and an astonishing 11 of the league’s 32 starters in Week 1 have one year or less of experience calling the shots, that doesn’t mean it’s right. Not everyone can break rookie records like Cam Newton, and the rookie starters this week proved that.

Save for RG3’s stellar performance and eight-straight completions and win over the Saints, the Colt’s Andrew Luck, Cleveland’s Brandon Weeden, Seattle’s Russell Wilson and Miami’s Ryan Tannehill all showed they are still quite green. Luck had a decent outing but still got blown out in Chicago, but the other three had games they’d rather soon forget.

The only reason Weeden’s Browns had a lead in the dying moments of their game despite his 4 INTS, was because the Eagle’s Michael Vick went toe-to-toe with him in the category with four of his own, behind his ridiculous 56 pass attempts. Wilson failed repeatedly to punch in a winning TD pass in Arizona despite having numerous opportunities in the redzone after the Cards allowed the drive to continue on penalties and the replacement officials granted Seattle an extra timeout. And Tannehill looked like a blooper real with three of his own INTs.

Perhaps some seasoning holding a clipboard on the sidelines to start your NFL career a la Aaron Rodgers would be a better approach.

When good is bad

This leads us into arguably the marquee matchup of Week 1 with the 49ers and Packers. In all of the 2011 season, the Packers only lost one game, however in four days they could possibly be off to a 0-2 start after they host the Bears on Thursday. The 49ers dominated Green Bay in every facet of the game on Sunday en route to a 30-22 win which actually flatters the Pack.

Everyone loves Green Bay and Aaron Rodgers and a Super Bowl win and a 15-1 season the past two years will do that, but they will be very overpriced throughout the season and Rodgers won’t be able to cover up all their deficiencies.

The Steelers have been one of the best and more feared defensive teams for years, but some of that luster may be wearing off. Yes they had some injuries on Sunday night, but they are aging and it showed in Peyton Manning’s Bronco debut where even though he hasn’t played a snap in over a year, he was able to move the chains at will with his limited opportunities. Despite Pittsburgh holding a 10 minute advantage in time of possession and having the ball for all but 36 seconds in the third quarter, Manning lead the Colts to a 31-19 victory.

When the Steelers and Big Ben had the ball, they no doubt also looked good. But that defense showed some leaks and Pittsburgh will be a team I’ll be looking to fade this year.

By no means am I happy to see high school officials running NFL games, but for one week at least, they’ll get a passing grade in my books. Other than a few holding and pass interference calls and non-calls, the only major mistakes were picking up a flag on a clipping call in Green Bay which gave them a touchdown, and awarding the Seahawks an extra timeout. Yes, glaring mistakes, but they were saved by the fact that both Arizona and San Fran won those games and the calls became a non-issue.

But c’mon NFL, this WILL blowup. NFL games, and my sports bets can’t be decided by guys who don’t know what city they’re in.