Shredding the spread one game at a time: NFL Week 2

This is tough as we have two teams that could not have looked more opposite in Week 1, however Philly still opened as the slight home favourite. There are several reasons to back off of Baltimore this week considering they are coming off a short week having played on MNF, they just played a divisional opponent in that game, and could be looking ahead to next week against the Patriots in a rematch of last year’s AFC final. This non-conference game could be a potential letdown spot.

However I’m really high on the Ravens and like them as a potential Super Bowl winner, as I did last year as well. At the risk of over-reacting, from a pure eyeball test in Week 1, the Ravens looked outstanding. No longer is Joe Flacco and the offense the achilles heel of the team. They seemed to move the ball at will vs. the Bengals and the no-huddle offense was clicking on all cylinders. I try to discount the whole “look ahead angle” sometimes and this could be a time to do so. It’s still early in the season, the new offense still needs to come together, and assuming both Baltimore and New England win this week, the win would put the Ravens in a spot to gain a game advantage over the Pats next week. It’s also not like they had to expend too much energy in dispensing of the Bengals in their 44-13 rout. They should also want to show up against another team touted as Super Bowl contenders in the Eagles. 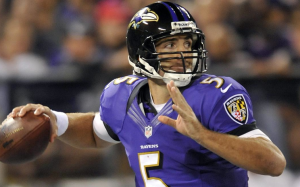 No way Philly is as bad as they were Week 1 the rest of the season, but if we’re going on purely what we’ve seen from each team so far, they could be in trouble. Yes Vick missed some time in the preseason and may need to get settled in, but the Ravens won’t be a team to do that against. If Vick can throw 4 INTs vs. the soft Browns’ D, I don’t see him righting the ship vs. the Ravens. The Ravens’ D is nasty and they’ll be doing their best to put a few dents in that Kevlar vest he’s wearing.

Seems like everyone is on Baltimore and line seems to be moving in their favour which is scary, but I don’t think I’ll be able to take them as an underdog too many games this season. They are here, and I’ll take my chances.

Once again, without having too much to go on after one week, I don’t want to jump to conclusions. But one thing that is well-documented is San Diego’s slow starts. While they may have come away with the “W” last week, they could’ve and probably should’ve lost the game, had Oakland’s litany of mistakes not handed them the game on a silver platter. The Chargers repeatedly started drives in Oakland’s territory, and were able to sit back and wait for the Raiders to botch their own offensive drives. San Diego struggled to beat the Raiders’ D, left them in the game, and barely won 22-14.

On the other end, the Titans looked awful against the Pats, but then again the Pats do that to many teams. Couple that with the young Jake Locker getting his first NFL start, it wasn’t necessarily a recipe for success. But this is still a team that went 9-7 a year ago, one game better than the Chargers. Locker had his shoulder banged up last week but looks to be ok. Even if he can’t go, having veteran Matt Hasselbeck on the sidelines isn’t the worst option.

Titans could very well pull the upset, but even if they can’t, they are more than capable of keeping things close.

I started to see this line moving up, so from a value perspective, grabbing a 6.5 seemed like a smart move. Of course everyone is high on San Fran after what they did to the Packers at Lambeau, but it definitely showed this team is for real. They laid the smack down on the Packers and now return home to take on a far inferior opponent in the Lions. By contrast, Detroit deserved to lose their game vs. the Rams, but somehow came away with a late win. Much like the Ravens/Eagles game, if Stafford can throw 3 INTs vs. the Rams, I fear for him in the Bay.

If San Fran keeps playing as they did in Week 1, it will be hard to find value on them, but for this week, the 49ers at home, at under a touchdown looks too good to pass up.

Other teams worth a look on both the spread and even ML: