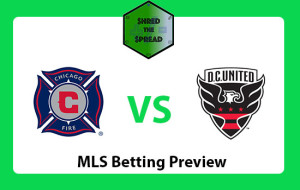 Two teams on the outside looking in to the Eastern Conference playoff race match up tonight in Chicago. Chicago has slim hopes of finishing top 6, as they sit 9th with 26 points, but have definitely picked up their play of late. The Fire are 2-2-2 in their last six and had a long run of undefeated matches at home until last week when they fell 2-1 to TFC. They have though, only lost three times at home this year. The Fire have scored at least once though in each of their past 9 games and only failed to score once in their past 13 games. In fact in their last six games they have an impressive 13 goals.

D.C. have it all to play for here as they currently sit 1 point out of the playoff picture in 8th with 33 points, and must more past New England in 7th with 33 points as well and Orlando in 6th 34 points. A win would be ideal but any points at this time of year would suffice to keep pace. United do struggle on the road though having only won once on their travels all season. D.C. has also not had trouble finding the back of the net as they’ve scored at least once in  their past 10 games and have 10 goals in their last 3 games.

Six of those goals came back on August 27th at home to Chicago where they blew out the Fire by a 6-2 scoreline, aided though by a Fire red card in the 34th minute. These two teams met on April 30th in Chicago and settled for a 1-1 tie.

The goals are flowing for both teams right now and neither can afford to hold back in this one.